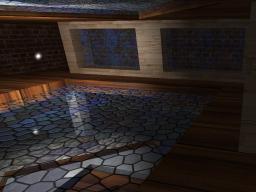 Required:
Direct3D 10
One of the main drawbacks of deferred shading is that it doesn't handle blended objects very well, and typical rendering scenes include at least some translucent objects. The usual solution to this problem is to render translucent objects using traditional forward rendering on top of the deferred rendered scene. This is obviously far from ideal since it forces you to write and maintain a forward rendering path in addition to the deferred shading path, and it also has negative performance implications.

This demo shows a way to solve this problem such that translucent objects can be used with deferred rendering. This is done by using a deep buffer approach. Instead of having a single buffer containing the attributes such as diffuse and normal this technique stores several layers of these attributes in a texture array. Similarly, the depth buffer is also a texture array. In this demo three layers are used, which allows for up to two translucent layers in front of an opaque surface. More layers may be needed in more complex scenes; however, it would still typically suffice to maintain only a few layers. The different layers are extracted using depth peeling.

In the deferred lighting passes the lighting contribution from each layer is computed. However, the cost will not multiply with the number of layers, but instead be only somewhat more expensive than traditional deferred shading since we can stop once we hit an opaque surface, and typical scenes will have a lot more opaque surfaces than translucent, so the majority of the pixels will only have to evaluate the first layer.

The drawback of this technique is naturally in the memory consumption. Deferred shading already consumes a large amount of memory for the render targets, and this technique multiplies that with that number of layers. This may not be much of an issue on PC, but on consoles it could be more problematic. The cost of the light rendering passes also increases, although not too bad. However, the cost of filling the buffers in the beginning increases by a larger number.

This demo should run on Radeon HD 2000 series and up and the GeForce 8000 series. Since it's Direct3D10, Vista is also required.