"Democracy: The state of affairs in which you consent to having your pocket picked, and elect the best man to do it."
- Benjamin Lichtenberg
More pages: 1 2 Time for another GPU battle
Tuesday, April 13, 2004 | Permalink 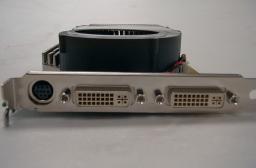 Which one will you get Humus? Both?

Congradulations on you getting your work permit, does sound strange you have to get permission to work you know. Take care and may Yah be with you.Humus
Wednesday, April 14, 2004

Well, since I'll be working at ATI I'm likely to be playing with the R420.
Well, not sure it's so strange to require a work permit. To my knowledge, it works that way in pretty much every country. You can't just move there and start working as a foreigner. I wish you could though. I'm of the opinion that we should work towards removing all country borders in the future.Note
Wednesday, April 14, 2004

Yeah, I so agree to the boarder discussion there...and kill all langauges but one when you are first at it (not all programming languages tho'...

It will be a million years untill I can afford a new GPU. I have 9800Pro right now, so I guess I can manage for a while.

BTW how did you get that job? And what is it you are going to do?

Where is realtime radiosity?

Seems like one heck of a card, will be interesting to see if ATI can outdo nVidia this time too.

In any case, I'll go for whatever offers the nicest performance at the best price

This is a nice little pre-something-or-other about the NV40.jiMMy
Wednesday, April 21, 2004

Is it better to wait for Ati to release their next FP24 card with VS/PS 3.0 support? Their current FP24 cards run twice as fast as any current FP32 cards in VS/PS 2.0 shader benchmark.

Would FP24 compromise image quality running long shaders (100-1024 instructions like in Nvidia cards) due to roundoffs, etc.? How severe?

The demos in this Nvidia literatures show severe artifacts (nose and shoe demos) rendered with FP16. By the way, what are these artifacts called?

Now, I am curious how FP24 would fair for these demos :?(. I search everwhere for these Nvidia demos but can't seem to find them :?(.

Humus, do you have a similar demo that would showcase these artifacts rendered in FP16, FP24 & FP32? I look for similar 3rd parties demos. No luck. Could you make one if you have time? ThanksMesserFuerFrauSchmid
Thursday, April 22, 2004

PS3.0 requires 32bit throughout the pipe (although not IEEE)!More pages: 1 2