"An appeaser feeds the crocodile in the hope that it will eat him last."
- Winston Churchill
More pages: 1 2 GPU battle continues
Thursday, April 22, 2004 | Permalink 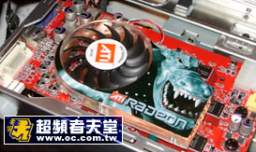 There have been some info leaking about the R420, though much of it have been contradicting, so it's hard to know what's true and not. But now a photo of the card has hit the net, and it seems credible. The cooling looks a little bit larger than what we're used to from ATi, but at least it seems to be single slot. It will be very interesting to see what this beast will manage once it's launched. Rumors say that it's going to be launched on Monday (April 26), but other dates such as May 3 and May 5 have also been mentioned. Personally I'm very excited and can hardly wait to see this thing in action.

Rumors say it's going to kick the NV40's ass.

I think the NV40 and the R420 will be neck and neck in performance -- pending ATi's next generation, the R5xx, shows up.

Of course, when the R5xx <i>does</i> show up, nVidia will produce a newer version of their 6800 to compete with it, and things will subsequently begin to be very much akin to how they were with the battle between nVidia's 5950 Ultra and ATi's 9800 Pro.NeoKenobi
Tuesday, April 27, 2004

@MesserFuerFrauSchmid: hmmm... aren't you a little bit biased instead of Humus?

@NeoKenobi Nope not at all, but everything sounds like the ATI R42x is just a little upgrade to the R3xx marchitechture, maybe its double as fast but that's basically it this is not something I would jump on (especially if you consider that R3x is 1 1/2 year old). On the other hand I don't like the way NVs going either with two mulex power connectors its a no no no no on my side.MesserFuerFrauSchmid
Saturday, May 1, 2004

Well it is pretty obvious now. ATI R4xx no support for VS3.0 nor PS3.0 so no Shader model 3 support, pretty lame. But at least they seem to have upgraded the number of instructions to 0.5k and the number of registers as wellPaulT
Sunday, May 2, 2004

Nope I don't think so, have a look at their GDC2k4 slides, there is a VS_2_b profile as well which is new (and definitly relates to ATI). Besides VS3.0 has output semantics which can only be matched with a PS3.0 counterpartPaulT
Tuesday, May 4, 2004

I read about VS 3.0 on some hw related page few days ago. Maybe they're wrong. Anyway, I don't plan to upgrade my good old GF 4200 in next few months, just to see how the little GPU war will evolve. Perhaps ATI will come up with totally new chip?More pages: 1 2