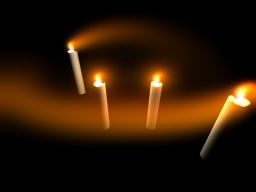 As the winter approaches, or have already arrived at some places, it's time to cosy up with a demo of candle flames dancing in the dark. Well, not only the flames that are dancing in this demo, the actual candles are jumping around as well causing the familiar light trails you can see in real life as well in a dark room with candles when the the bright candle light sticks on the retina.

Doesn't seem to work properly on my Geforec 6.(flashes and the trails)
By grabbing textures/framebuffers it all seems ok up until the last render of the quad over the scene. Perhaps the glBlendFunc(GL_CONSTANT_COLOR,GL_ONE); blending mode is messing up somehow?Humus
Wednesday, October 27, 2004

Same problem with the 70.xx drivers. Though strangely if I move the window around the screen the trail appear momentarily. How oddDa3dalus
Wednesday, October 27, 2004

I've got the same problem with missing trails and flashing

Doesn't work quite right on the R9800. Full screen is jerky but the FPS counter show 30-43. Works fine in windowed mode thought with FPS 300+.

Sorry, yet another "doesn't work right on a GeForce 6800GT." Your other demos seem to work fine on this card though.More pages: 1 2 3