"I have always wished that my computer would be as easy to use as my telephone. My wish has come true. I no longer know how to use my telephone."
- Bjarne Stroustrup
More pages: 1 2 3 4 5 6 New demo
Monday, December 12, 2005 | Permalink 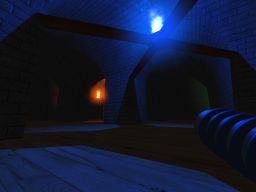 Some full screen glow and HDR effects would also add a lot to the realism!

Check your mails tomorrow; I got a little surprise for you too...

cool. been a while since I walk around in a relaxing 3d environment. great music too.Nintengod
Monday, December 12, 2005

Holy Crap! I come here on a daily basis, and every time I hope that you will have released a demo of your new game engine, and here it is! It's about friggin time! lol. Looks greatNintengod
Monday, December 12, 2005

I just discovered a pretty major clipping issue.
It's the bottom half of the wall to the left of
the window that looks out into the skybox and has
the "wind" sound effect. Not the bay windows area,
just the one window where you turn right when
facing the window to continue down the hall.
Anyway, both rockets and the character can go
through that wall, not that it would be a normal
thing for someone to be turning left there, since
it's just a wall.Galmok
Monday, December 12, 2005

Galmok, you need to update your drivers...
FBO were released and supported not too long ago.

Self-shadowed bump maps do not seems to be working.
Bump maps react to lighting just fine, but do not get any darker on the sides opposite a light, only lighter on the lit side.
Also, the shadows do not conform to the parallax map as in your "self-shadowed bump mapping" demo.
Could just be me...More pages: 1 2 3 4 5 6