"You may be sure that when a man begins to call himself a realist, he is preparing to do something he is secretly ashamed of doing."
- Sydney Harris
Updated Interior Mapping demo
Friday, August 15, 2008 | Permalink 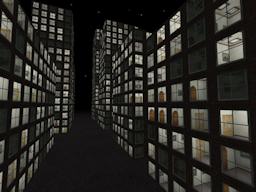 I've added a small optimization to the Interior Mapping demo that boosts performance by about 80% in the default position. I didn't sort the buildings before, and as it turns out, the default position had them drawn more or less in the worst case order. A few lines of code to sort buildings by distance and it's now running a lot faster.

I know. I wasn't too impressed though. I was hoping it would finally fix all the problems with GL, but this is more like OpenGL 2.2. They did the same crap with OpenGL 2.0 too. And now we've changed the major API number again, without actually fixing the problems with the API. And they made us wait another year for it too. I'm at the point right now where I think the only way for Linux and Mac to be able to compete with Windows is if people get rid of GL all together and create an OpenDirectX API and give it a native interface so it's possible to write native DirectX drivers for Linux and Mac and allow easy porting between the different platforms.eXile
Tuesday, August 19, 2008

Yeah, OpenGL 3.0 is a complete fail, estimated to the expectations some developers had. That idea of an OpenDirectX API sounds really interesting, however, I don't think we will see anything like that very soon.Entar
Monday, September 1, 2008

At least from a programmer's perspective, I don't see what's wrong with OpenGL as it is. I use OpenGL for the vast majority of my projects, despite the fact that I have tried Direct3D and have learned enough to know what's going on. It's messy and difficult to me. I hear that OpenGL 3.0 was supposed to fix some difficulties with writing drivers for it, but I'm not too knowledgeable on that subject.Jan
Sunday, September 7, 2008

I've got a problem reproducing your implementation. I posted in the OpenGL forum, but no one else seems to have an idea, what i could be doing wrong, maybe you could take a look at it: