"According to the human genome project, humans are 50-60% bananas."
Drawbacks of modern technology
Saturday, January 24, 2009 | Permalink

CRT monitors have been out of fashion for a while now, and while they took a lot more desk space than the modern flat screens they had one important advantage: you could put stuff on top of them.

So I just got myself a nice 5.1 system for my computer: 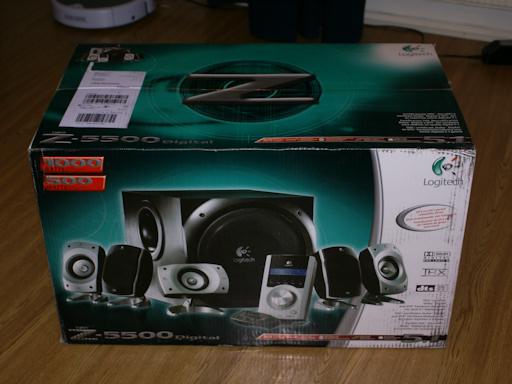 The sound is great and all, but the problem is I have no place to put my center speaker. My monitor has a frame that's less than 5 cm (2") thick, and that's on a 30" monitor. I'd need about the double for the speaker to stand stably. I can hardly be the first one to have this problem, but oddly enough after spending the whole day going from one electronics shop to another and even going to Ikea and the likes I found no product for mounting anything on top of a LCD screen. Not even google seems to come up with anything useful. Back in the CRT days there were products for turning the top of a monitor into a shelf, even though often the screen itself was good enough for things like a center speaker. For now I've simply put some screws through the holes and just let them hang in front of the monitor, which should at least keep it from sliding backwards. Not a particularly pretty or safe solution, but at least it's standing there now.Overlord
Sunday, January 25, 2009

Well except for a webcam you shouldn't mount anything on a LCD display.
But here is the nice part, while you can't mount anything on top of it you can place stuff behind it.
You know like a small shelf where you can hide all the routers and stuff, a perfect place to mount the speaker on.
Personally i mounted my speaker on the wall above and behind my monitor since it had this nice wall mount bracket.Humus
Sunday, January 25, 2009

Well, I don't have a wall behind my monitor, so mounting it on the wall is not an option, but placing a shelf behind it would perhaps work, but then I'd have to find some other space for the printer.

Today I naturally managed to bump into the desk, and not surprisingly, the speaker fell off and all the way down to the floor.

Thankfully it didn't break. For now I've secured it with some tape. Not a pretty solution but should hold for now.Jarhad
Monday, January 26, 2009

There's no space below the monitor. I wouldn't want to raise it since it's quite large and it's most comfortable viewing it when it's pretty much down at the desk level.

For the rear speakers I've put them on the back of the couch. I need a prettier solution there too, but this should work for now.Chris
Tuesday, January 27, 2009

That would probably work. I assume it doesn't have to be put across a corner like that, because that wouldn't work for me, but if I can put it on a desk edge it might work.