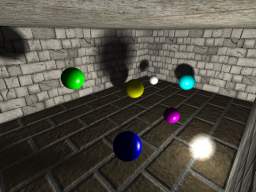 Another demo to waste your precious time on.

Kicking around those balls, oh man, that's hours of fun!

It looks nice and all, but I can't knock the balls around! After awhile they just stop bouncing

You have to press and hold the left mouse button a sec or two, then sneak up close to the ball and release.Dassassin
Monday, August 30, 2004

Shadows don't seem to work on my 6800 - no errors or warning so a nvidia bug? Anyone else get it working on Nvidia?slang
Monday, August 30, 2004

BTW, is it possible to generate a shadow which is casted by a complex object such as teapot or something?MesserFuerFrauSchmid
Monday, August 30, 2004

Well if its really raytraced sure it can, but it will probably painful slowDaedalus
Monday, August 30, 2004

Ah, now I get it... I have to move the camera close to the ball. I'd prefer to be able to bounce them with the right mouse button without moving the camera (sorta similar to the controls in the Water demo), but at least it works now

) with light source moving around it in waves.